Over the last year there has been a fair few changes to the multi gauges, addition of the wideband lean out warning, making the oil and fuel pressure warning systems much more advanced, but none of these are as big as this update, this is a complete hardware refresh along with new sensors & inputs and some decent firmware changes and communication protocols. The base pack now comes with an IAT sensor, the EGT sensor has had a huge upgrade, the unit now has dual volts input, Lambda reading added to the wideband input, JST style connectors throughout the kit and changes to the shift light setup.

While these gauge kits were already a terrific little bit of kit, this latest v2 hardware & firmware refresh has brought them up to the next level. These powerful little units really are boarding on a complete engine monitoring package that let you monitor almost every vital part of your performance car, track car and even 4x4’s. And while a lot of customers first see these as just a gauge readout, they go way beyond that, the warning system on these devices is the heart and soul of what makes these kits an ultimate engine monitoring package.

Below you will find a breakdown of the new hardware & firmware features in these latest models, we are very excited about the possibilities for these latest models and feel confident customers will see how incredibly powerful, practical and just overall great value these little kits really are.

Another feature that was added in this latest revision is now the ability to select between AFR or Lambda readouts for the Wideband input. The version before had just AFR readings of 10-20 which is the range used for petrol, now while you can still use this on fuels like e85, ethanol etc, it’s not the working range people are used to when dealing with fuels other than pump petrol. It’s now possible to switch the gauge to displaying Lambda readings which is the wideband controller’s native reading before it’s converted to AFR. This now means if you are running e85, methanol, and ethanol fuels that you can use Lambda to gauge your fuel mixture. The Spartan 2 widebands we sell have a Lambda range of 0.68 to 1.36 and is wide enough of a range for most alternative fuels except for Diesel.

Just like firmware v1.2 where there was a wideband lean warning added, this function will also work with Lambda, so you can setup the highest Lambda reading you would like before a warning is triggered while under a certain level of boost of WOT on an NA setup. If you would like a detailed rundown on how this warning works, have a read of this article click here

Now while there was nothing wrong with the old EGT sensors we used, they were extremely accurate and many cars are out there still running them, but over the period of selling the v1 models of these gauges we started to learn a decent amount about EGT sensors, and what does make one sensor stand out above the rest. This lead us to the EGT sensors now included with these kits, which are a superior quality K-Type thermocouple made from 3030 stainless steel, can withstand constant operating temps of over 1000c and burst temps of up to 1200c, use high quality deutsch plug connectors at the sensor end, and stainless shielding. These sensors cost 3x that of the old sensors supplied and after initial testing here, we feel the extra investment in these new sensors was well justified.

The other major difference between these EGT sensors and the old ones supplied, also different to a decent amount of other aftermarket gauges sensors supplied out there was this, these EGT sensors are using multi strand wires in the cabling from the sensor induction point right back to the connector going to the control box. Now you might ask why this even means anything at all, well what we discovered here over time was that the main killer of EGT sensors was not heat, it was actually vibration and engine harmonics and the single strand EGT sensors were more susceptible to these vibrations over time causing those single strand cables to break causing EGT sensor failure. The new multi strand sensors are better able to cope with this kind of harsh environment and so you can expect a longer life expectancy from these terrific new EGT sensors supplied with the kits.

These gauges have really been taken up by the 4x4 community, and one question we would get very often from these customers was if the units could do dual volts. While the units did have a single volts display, the 4x4 guys have aux battery’s that they like to also monitor separately to the vehicles primary battery. So just for you guys, we had a second volts input added to the gauges. This we are sure will be a hit with the 4x4 customers.

As we made mention of on the product page itself, this second volts can also be made useful for those with performance or track cars too. We think this input could be utilized by connecting it to the power feed for the cars fuel pump. Voltage drop to fuel pumps can cause a drop in fuel pressure which can be very dangerous. You would set a very narrow window warning setting for this and if there was any voltage drop to your fuel pump that could equate to lower fuel pressures, the gauge will throw a warning.

These kits already allowed people to monitor such a large range of metrics on their motors, but we thought there was one thing lacking that could really bring them up to an almost total monitoring solution, and this was air intake temps. For those that own supercharged or turbo charged vehicles, monitoring air intake temps can be an important thing, excessively high intake temps can cause detonation and it’s always a good idea to keep an eye on these just like it is with air fuel ratios. So now the base pack comes with an IAT sensor and the multi gauge will give you a readout of your air intake temps along with being able to setup a warning if the temps get too hot.

There was a couple of small yet significant changes to the way the shift lights functioned as well, the first was it was added that you could now select  the sift lights to move from right to left as well as left to right. Now you might be asking why you would want them to go right to left, this is for customers that are running dual screen setups, you would have the left screen illuminate from left to right, and the right screen right to left. This way the shift lights on both gauges would shoot towards the middle of each other.

So now, each LED can have its colour changed independently of the other LED’s, each can be selected to be either Red, Blue, Green, White, Orange, Cyan & Purple. What this has allowed us to do is setup a default layout of the LED colours where lights 1-5 are Green, 6-7 Orange and finally 8 is Red. This mimics a more traditional shift light setup and is nice and clear from the peripheral vision. Of course being that each LED can now be set how you wish, customers can create their own arrays of colours and combinations which we think is a really good thing.

Another hardware improvement that was made to the kits was all connectors are now high quality JST style connectors. These little things aren’t actually cheap, but what they do is allow for effortlessly smooth connections, better crimping on the pins in the connectors and just overall a higher quality finish to the product. Most people don’t give a second thought to connectors, but it’s something we thought was worth the investment to increase the overall quality of the product.

Along with the hardware refresh both the control unit and OLED gauge itself have had both their main processors upgraded. The previous processers were decent, but with the addition of IAT sensor and dual volts, internal logging time increased to 5min, Lambda readout, we had exceeded the channels available on the old processors, as well as hitting the maximum memory available on those processors. So both the control unit and display are using processors with more channels, more memory, and faster response times. This has allowed us to extend the internal logging to 5min, and allowed the extra sensors, extra readouts and allows us to further expand on the gauges features in the future. The communication protocol between the control unit and screens is now CAN, this allows for simple chaining of multiple displays and is an industry standard for providing a stable and safe data stream from the control unit to gauge, and from one gauge to another. 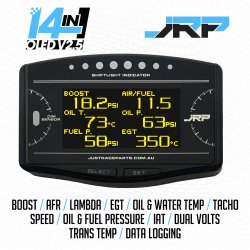 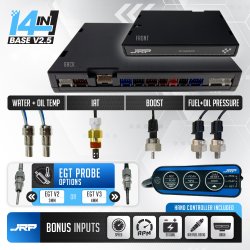