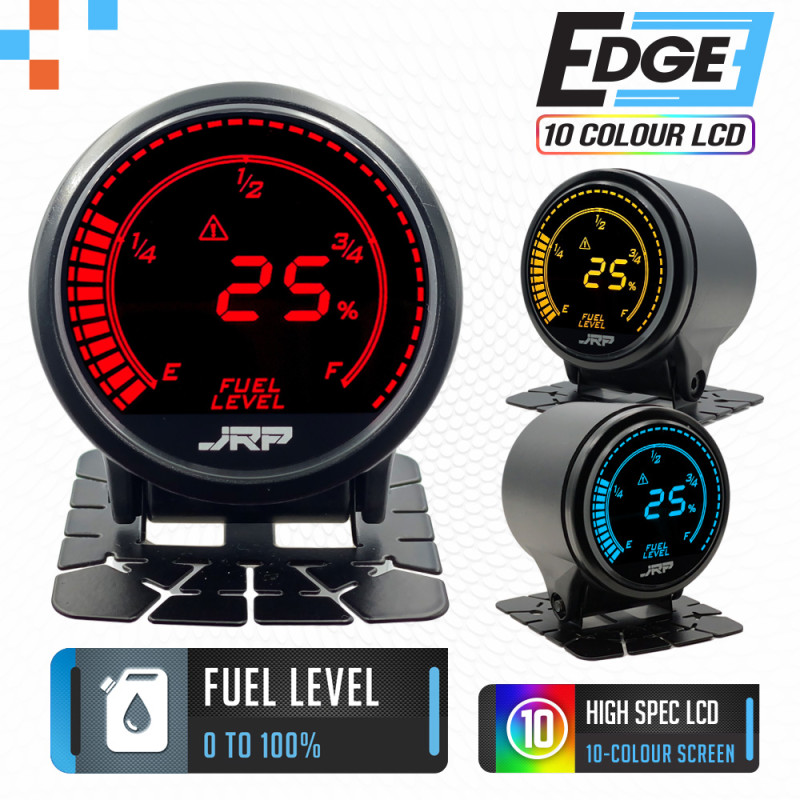 One of the most painful little but big things that can go wrong on a cars instrument cluster is you fuel gauge stops working. It’s a never ending guessing game on when you might run out of fuel, asking yourself when did I last fill up, how many kilometres have I done since the last fill. It’s a little problem but comes with a lot of annoyance. There will usually be only two culprits for the vehicles fuel gauge to just stop working, one is the sender itself in the tank has gone, this is a major pain in the butt, another is the cluster itself has developed an issue and no longer displays readings from the sender in the tank. Thankfully we have a solution to one of those problems with our JRP Edge 52mm universal fuel level gauge kit. These gauges support up to 24 different types of fuel level senders, for those that don’t know fuel senders run on Ohm’s kind of like temp sensors, our universal fuel level gauges support 24 different sender Ohm ranges for maximum compatibility. We have created an image which you can find in the image gallery for these gauges that lists the 24 different Ohm ranges these gauges can support.

If you don’t know what Ohm’s range your fuel sender is, this can be worked out by using a multi meter set on the ohm’s setting, you simply measure the ohm’s that your sender is putting out when the tank is empty and then full, this will let you know the range you need to select from the one of 24 ranges these gauges support and you are away. There are plenty of guides online on how to check the ohm’s rating of your fuel level sender, so with a quick google or YouTube of the topic you won’t have any trouble finding a guide on how to go about it.

Another use for these 52mm universal fuel gauges will be for people that have done cluster conversions where their new cluster uses a different Ohm’s range and their fuel level gauge is giving an incorrect reading, you could install this 52mm fuel level gauge and select the ohms that matches your fuel sender and bingo you have an accurate fuel level indicator once again. These gauges will also be handy for people that have built themselves cars, be it kit cars, just something that was slapped together in the garage, all you will need is a pretty standard and easy to source fuel level sender, throw that in your tank and connect up this gauge and again bingo you have fuel level. There will be people that have boats, bikes that can make use of these little gauges as well.

There really is a lot of different reasons customers might have the need for a fuel gauge, and with our JRP Edge 52mm universal fuel level gauge we have you covered. Along with all of the other models in the Edge range, we have matching gauges so you can not only solve your fuel gauge dilemma, but you can match the gauge with other great models like our boost, water temp, oil temp and more. We have really tried to cover a wide range of gauge models and functions, as we know people like to if possible have matching gauges for all their different requirements.

Below you can find a bunch more information on our JRP Edge 52mm digital fuel level gauges, a main features breakdown, what is included in the box and for those that really like to know the product they are buying we have a decent detailed features breakdown section where we go over in detail some of the main points that make the JRP Edge range of gauges such an amazing little package. If after reading the below you have any questions, feel free to give the team here a call, email or shoot us a message on Facebook and we will be only too happy to help.

The crown jewel of the Edge 52mm range of gauges is their amazing VA type LCD panels that were developed just for this range. As soon as you see them light up you will know right away these are not your typical LCD gauge, they have an amazing clarity & brightness to them.

They have a brightness of 600nit which is also terrific, daytime viewing on some LCD gauges can be a little poor due to lack of brightness, this is not the case with the Edge range of gauges, and they are clear and easy to read in almost any condition. Also having such many selectable display colours means it will be much easier to match factory instrument clusters for those customers who want to maintain a consistent look in their cabin.

All our Edge 52mm digital fuel gauges have the Power Link feature and cable included, this is a simple way to provide power to more than one gauge with just a single link cable running from the primary gauge to any additional gauges. This is to save having to run multiple power looms for each gauge you have installed and reduced the soldering / crimping of power looms down to just the primary gauge itself. For any additional gauges you want to install, it is just a case of running a power link cable from one gauge to the next. It is a simple concept, but makes installing 3 or 4 gauges a much quicker and neater process having the feature be on the gauges.

While the gauges themselves have a single button on the gauge body itself which is used for making changes to the gauge’s settings, such as colour selection, warning values, viewing or clearing peak values, each Edge 52mm fuel level gauge comes with an external cabled button controller which can be installed somewhere tucked away in the cabin for making changes to the gauges settings after installation without having to remove the gauge from its housing to make the changes. Just simply connect our little button controller to the gauge and install somewhere easy to access, be it hidden away, or you can install it into your dash for the race look. Updating the gauges warning settings, changing colours, viewing or resetting peak values will no longer be a hassle at all.

While the gauges themselves have a single button on the gauge body itself which is used for making changes to the gauge’s settings, such as colour selection, warning values, viewing or clearing peak values, each Edge 52mm fuel level gauge comes with an external cabled button controller which can be installed somewhere tucked away in the cabin for making changes to the gauges settings after installation without having to remove the gauge from its housing to make the changes. Just simply connect our little button controller to the gauge and install somewhere easy to access, be it hidden away, or you can install it into your dash for the race look. Updating the gauges warning settings, changing colours, viewing or resetting peak values will no longer be a hassle at all.