*** NOTICE ***
We have been inundated with sales, currently the Edge 52mm Boost + EGT, Oil Pressure & the EGT Only gauges have completely sold out.

Our next shipment is due Aug 22nd, if you would like to guarantee getting one of these gauges, please  Contact Us  and get your name put down on our no obligation pre-order list.

Any product marked in-stock on the website is ready to ship. 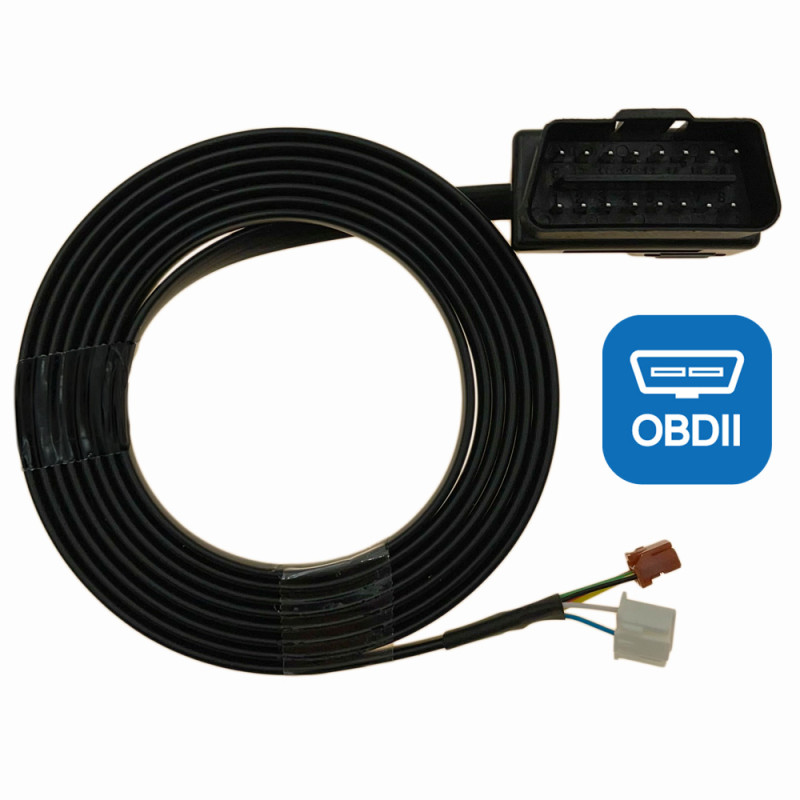 With the release of the latest v2.5 hardware in Jan 2021 of our very popular 14in1 multi gauge systems came with the added support for OBD2 installation. What this means is it’s now possible to connect our multi gauge systems up to the OBDii ports in vehicles that are equipped with an OBD2 to simplify the install by sourcing power for the systems from these ports, and in most cases also source readouts like Speed & RPM without the need to hardwire those in, and also any other readings the vehicle is outputting from the OBD2 port that our gauges support the readouts for.

To make use of the OBDii support in our systems, you will require one of these OBD2 cables to run from the multi gauge control unit to the OBDii port on your vehicle. Before ordering this cable you should make sure that your vehicle is equipped with an OBD2 port, these started showing up in mass produced vehicles both petrol and diesel from around 2001 and are found on most major vehicle brands like Toyota, Nissan, Honda, Audi, BWM for example. A quick google search of your vehicles make, model & year along with OBD2 should yield results if your vehicle is able to make use of this cable in the install process for the multi gauge systems. If in doubt, feel free to email us before making your order and we will be happy to help.

It’s worth checking if your vehicle has an OBDII port before ordering as this cable can be used as part of the install for your multi gauge setup for a couple of reasons. The first is that it will simplify the install, by using the OBD2 cable you can source power & ground for the gauges without having to solder or crimp in the DC power cables that are supplied with the kits. It makes the systems much more plug and play than having to use the supplied DC power cable and hardwiring them in.

The next one is if your vehicle does have an OBDII port and this cable is used, you will be able to read certain sensors or readouts from your vehicles ECU without having to install sensors. A good example of two readouts that most OBD2 ports will report to our gauges are Speed & RPM. Without using this OBDii cable customers would have to work out which pins on their vehicles ECU to tap into to get Speed and RPM inputs for our gauges to read. This would normally involve looking up ECU pinout diagrams and having to run wires from the gauge systems control box back to the ECU to tap into the pins that Speed & RPM are sent out from. With using this OBD2 cable our gauges are able to pull these readouts directly from the ECU from via the OBDII port and they will display on the gauge without any further need for hardwiring. This simplifies the install process of these systems quite a lot, you can simply plug in this cable to your vehicles OBDII port, and it will power the whole system and also provide the Speed & RPM signals.

Now apart from Speed & RPM, depending on the vehicle and what factory sensors are already installed and reported by the OBD2 port, you may find that you can also get water temp, IAT and some other readout as well directly from the vehicles ECU and the installed factory sensors. Every vehicle will be different on which factory sensors our systems will be able to read, but as above RPM, Speed, Water Temp are almost a given on most OBDII equipped vehicles. If your OBDII port sends out the factory Water temp sensors readings for example, then you would be able to forego installing the water temp sensor supplied in the kits and just use the factory water temp sensor to reduce how many sensors from the kit you have the physically install.

The support of OBDII on the latest v2.5 models of our multi gauge systems will be a very welcomed added feature to reduce the complexity of the install process for a large range of our petrol & diesel customers. If you have any questions about if this cable can be used on your vehicle, feel free to email us with your vehicles make, model & year and we will be happy to assist.

Will OBD2 Work With My Vehicle?

First thing to note about the OBD2 side of things with our systems is that the cable DOES NOT connect to the screen, the OBD2 cable connects to the control unit in our base pack below. If you are just after a standalone OBD2 setup, then our systems might not be for you. Below is a link to the base pack which is required along with the 14in1 screen and the OBD2 cable. 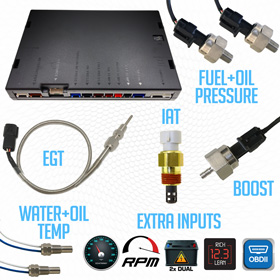 The same goes for Diesels, but from around 2000 to 2008 those can be hit or miss as well, from 2009 onwards they started to use industry standard protocols as well.

We have made our systems support the major industry standard OBD2 protocols, but being our systems were more developed to be standalone setups where OBD2 was something on the side to complement the standalone aspect, we didn't go to the lengths of adding support for single vehicles own special forms of OBD2. Some OBD2 readers did go to these lengths, because well that's their only use or function.

So our advice is, if you have a vehicle that falls into those years listed above, and if 100% wanting OBD2 it might not be the best idea to order our system. But if you are happy to use the DC power install method as a fall back, along with installing the sensors from the base pack and making use of the system that way, then our multi gauge might still be of interest.