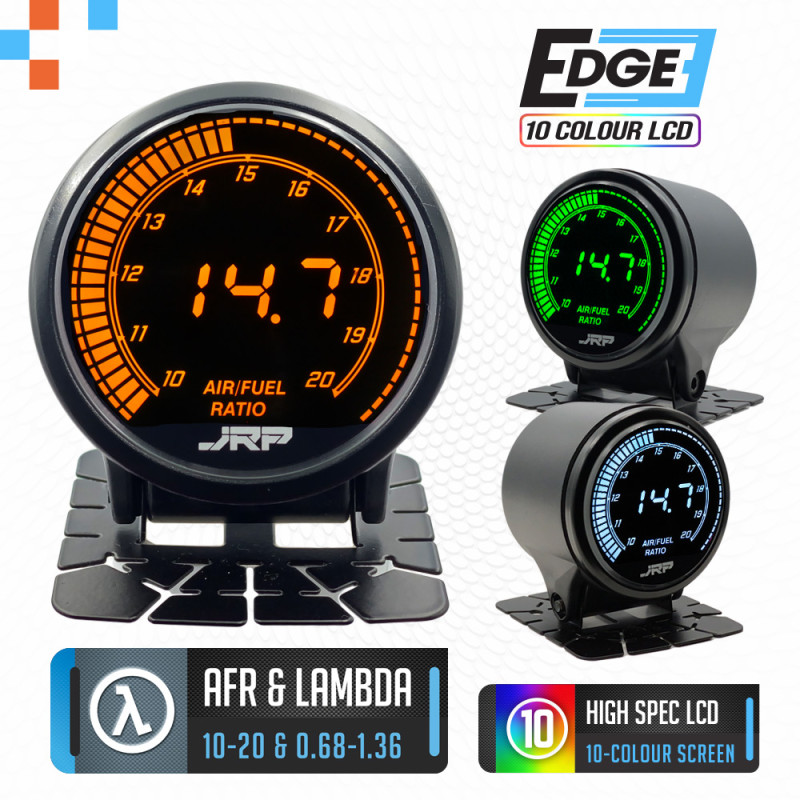 Here we have the JRP Edge 52mm digital air fuel ratio gauge, these are the little gauges we developed to originally sell with the Spartan wideband kits from 14Point7, but we had so many inquiries from customers that either own Spartan’s without gauges from around the world, or other widebands like the Innovate LC-2 which don’t come with a display gauge and wanted something that looked a lot nicer than what Innovate had on offer for an air/fuel ratio gauge, so we are now selling them separately for these customers. The gauges can display two types of readouts, the first is AFR mode with a scale of 10 to 20, the second is Lambda mode with a scale of 0.68 to 1.36.

To use these gauges the wideband you plan to connect these too will need to output a 0-5v analog wideband signal with a range of 10 to 20 AFR as standard or can update the analog output to this specification. If in doubt, please message us before ordering and we will be happy to confirm if these AFR gauges will work for your purpose.

The JRP Edge 52mm digital air fuel ratio gauge has two selectable modes of operation, the first is AFR mode and has a scale of 10 to 20, the second mode of operation is Lambda and has a scale of 0.68 to 1.36. The Lambda readout is particularly handy for those who are doing flex fuel, running fuels other than petrol such as e85, methanol or just people that prefer to use Lambda as their readout. Most decent tuners these days use Lambda instead of air fuel ratio for their tuning because of as above the use of flex fuel, customers having mixed tanks of fuel etc.

The crown jewel of the Edge 52mm digital air fuel ratio gauge is their amazing VA type LCD panels that were developed just for these gauges. As soon as you see them light up you will know right away these are not your typical LCD gauge, they have an amazing clarity & brightness to them.

They have a brightness of 600nit which is also terrific, daytime viewing on some LCD gauges can be a little poor due to lack of brightness, this is not the case with the Edge range of gauges, and they are clear and easy to read in almost any condition. Also having such a large number of selectable display colours means it will be much easier to match factory instrument clusters for those customers who want to maintain a consistent look in their cabin.

All of our Edge 52mm digital air fuel ratio gauges have the Power Link feature and cable included, this is a simple way to provide power to more than one gauge with just a single link cable running from the primary gauge to any additional gauges. This is to save having to run multiple power looms for each gauge you have installed and reduced the soldering / crimping of power looms down to just the primary gauge itself. For any additional gauges you want to install, it is just a case of running a power link cable from one gauge to the next. It is a pretty simple concept, but definitely makes installing 3 or 4 gauges a much quicker and neater process having the feature be on the gauges.

While the gauges themselves have a single button on the gauge body itself which is used for making changes to the gauges settings, such as colour selection, warning values, viewing or clearing peak values, each Edge 52mm air/fuel ratio gauge comes with an external cabled button controller which can be installed somewhere tucked away in the cabin for making changes to the gauges settings after installation without having to remove the gauge from its housing to make the changes. Just simply connect our little button controller to the gauge and install somewhere easy to access, be it hidden away, or you can install it into your dash for the race look. Updating the gauges warning settings, changing colours, viewing or resetting peak values will no longer be a hassle at all.